At the 2021 American Academy of Ophthalmology annual meeting, Greg Kunst, CEO of Aurion Biotech, presented their plans to initiate clinical trials for cell therapy for the treatment of corneal endothelial disease.

This technology propagates healthy cells from donor cornea, allowing up to 100 recipient eyes to be treated from a single donor sample. In Japan, the clinical trial has successfully demonstrated safety, efficacy and tolerability of Vyznova, the lead candidate of Aurion Biotech.

Greg Kunst: Yeah, so we presented on what could be a potential to be a major game change in the way that we treat corneal endothelial disease here in the United States around the world. So we're doing this with cell therapy. Today that cures blindness, restores vision, to potentially 16 million people in the US, Europe and Japan affected by corneal endothelial disease. And the reason why I think it's a potential game changer is really for four simple reasons.

One, it's an injection of cells, and therefore can be used by a broad spectrum of ophthalmologists around the world, dramatically increasing the number of treaters available for corneal endothelial disease.

Two, this, this is using natural human endothelial cells, because of that safety profile is quite pristine, potentially allowing us to move this treatment earlier in the treatment paradigm.

Third, it's already been proven. We've done this drug now, in over 100 patients with some of those patients with five more years of experience in four different trials with Japan and in El Salvador. We know the drug works.

Fourth and most importantly, it scales. Unlike today, where we need a donor for every person treated for corneal endothelial disease, with every donor with a part in cell therapy, we get 100 treatments today. In the future, you know, one to 1,000, maybe one to 10,000. This all has all the hallmarks to be the really the next great innovation in ophthalmology.

Well, so number one is we know there are about 13 million people around the world that are corneally blind. And usually one of the primary reasons that we see corneal blindness is the lack of available corneal tissue around the world. Even the United States, we reserve corneal surgical transplant really for the worst patients. And because of this, we believe that we can reach many more patients with corneal endothelial disease, including Fuchs dystrophy or post keratopathy.

And so I think, certainly, it's an area where lots of people are untreated. And now in the future, with the approval, we'll have a way to treat patients most early disease process.

So our next stages is to enter trials for the United States. Obviously the clinical trial process takes time. This is a rare technology because of the prior clinical data, generated in Japan and El Salvador, we know it works. Now it's the test of time of clinical trials, and at the end of these trials, we are hopeful, optimistic, that we'll be able to get approval from the FDA and many other regulators around the world. 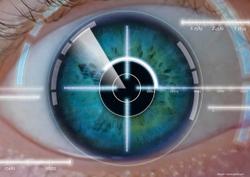