In this article, the authors review the various corticosteroid options and attempt to determine their place in the therapeutic regimen.

Treatment for DME begins with treatment of the systemic disease by lifestyle modifications, including tight blood sugar and blood pressure control, increased exercise, weight loss, and lowering circulating triglycerides and cholesterol. The UKPDS trial showed that an 11% reduction in HbA1c from 7.9% to 7.0% in type 2 diabetics reduced the risk of microvascular complications of diabetes including the need for photocoagulation by 25%.8 Similarly, tight blood pressure control reduced the risk of microvascular complications by 37%.9 However, once there is progression to DME, therapy is indicated to slow the rate of vision loss and to attempt to improve the long-term prognosis.

Focal macular laser has been the standard of care for the last 30 years; nevertheless, with the rise of anti-VEGF agents and their ability to not only stabilize vision but improve it in a majority of patients, intravitreal therapy has become much more commonplace. However, anti-VEGF is not the only injectable therapy as newer steroid-based therapies become available. This article will review the various corticosteroid options and attempt to determine their place in the therapeutic regimen.

Triamcinolone is a corticosteroid suspension that has been used to treat conditions such as pseudophakic cystoid ME and posterior uveitis. It has demonstrated long-term depot stability within experimental animal vitreous of up to 41 days and has been shown to act to reduce VEGF production, decrease prostaglandin production and to stabilize the blood retina barrier.10

Several small randomized trials have reported improvement in visual acuity in eyes with recalcitrant diffuse DME with intravitreal triamcinolone (IVTA).11–13 In a study of 69 eyes randomized to 4 mg IVTA injections or placebo, improvement of ≥5 letters was found in 19 of 36 (56%) eyes treated with triamcinolone compared with 9 of 35 (26%) eyes in the sham group (p = 0.006) after two years.11 OCT analysis demonstrated a significant decrease in central macular thickness.

When compared to laser therapy, however, the results have been inconclusive. In a small study of 26 eyes treated with IVTA and 16 eyes treated with focal laser therapy (FLT), a significant improvement in VA was demonstrated in the IVTA group.12 However, the much larger http://DRCR.net/ compared 840 eyes randomized to focal/grid photocoagulation (N = 330), 1 mg intravitreal triamcinolone (N = 256), or 4 mg triamcinolone (N = 254) with the option to retreat for persistent oedema every 4 months. After 4 months, the 4 mg triamcinolone group had better visual acuity than both the laser group (p < 0.001) and the 1 mg triamcinolone group (p < 0.001). However, at 1 year there was no statistical difference between the three groups. At the primary endpoint of two years, the FLT group had a small but significant improvement in BCVA (+1 letter vs –2 and –3 letter loss) over both of the IVTA groups.14

Within the http://DRCR.net/ study, steroid induced side effects were commonplace. Eyes treated with 4 mg intravitreal triamcinolone had significantly higher rates of increased ocular pressure (33%), need for anti-glaucoma medication (30%), and need for cataract surgery (51%) when compared to the FLT group.14 There was a doubling of cataract development and IOP anomalies in the 4 mg group when compared to the 1 mg group. When compared to FLT, intravitreal steroids demonstrated no long-term benefit on visual acuity and led to significantly higher side effects and increased ocular morbidity.

With the high rate of complications and without evidence for its superiority over laser photocoagulation, intravitreal triamcinolone is generally reserved for patients refractory to laser photocoagulation and anti-VEGF agents.15,16 A recent Cochrane review also supports this notion.17 IVTA has an advantage over FLT in that it can be repeated multiple times as long as the IOP rise and cataract risk are remembered. FLT can lead to an increase in foveal non-perfusion with repeated treatments and macular scarring. A literature review from 2010 found that the addition of triamcinolone to FLT had no significant effect on visual acuity.18

Currently, one clinical trial has studied the effects of the Dexamethasone DDS compared to observation in eyes with DME previously treated with focal laser therapy. Kuppermann et al. randomized 315 eyes to 350 µg DDS, 700 µg DDS or observation. After 90 days, an improvement of 10 letters or more was observed in significantly more of the eyes treated with 700 µg DDS (35%), 350 µg DDS (24%), compared to observations (13%).21 In a follow-up publication, significant improvements in visual acuity, retinal thickness and fluorescein leakage were maintained through at least 6 months.21 Of both treatment groups, 15% developed intraocular pressure (IOP) elevations of greater than 10 mmHg at some point during follow up, though the authors point out that the elevations were generally singular, and only 2% of patients had sustained IOP elevations at 90 days. No subjects required IOP reduction surgery. The follow up time was too short to comment on cataractogenesis.

Similar to IVTA, Dexamethasone DDS has the advantage of repeatability as long as the IOP and cataract effects are mitigated. Significantly different from IVTA, the level of drug within the vitreous is stable during the life of the implant, whereas with IVTA the level initially peaks, then slowly trends downward. 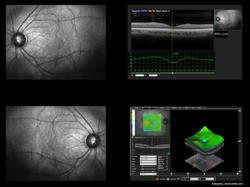