Although the deleterious effect of strabismus on the ability to perform well educationally, find employment and secure career progression has been noted in previous studies,1–4 and the relationship between strabismus and mental health problems has also been considered,5 the wider impact on sufferers' personal lives and fundamental human relationships and interactions remains undocumented.

The social burden of strabismus

To widen our understanding of the impact of the condition, Dr Mojon and his colleagues conducted a study examining the impact of both forms of strabismus and other facial anomalies on the perceived ability to find a romantic partner, the results of which he discussed with Ophthalmology Times Europe.

Dr Mojon's team conducted telephone interviews with the employees of 40 dating agencies in Switzerland, some of whom were able to access digitally altered photographs of a male and female subject: Dr Mojon and his wife, Dr Mojon-Azzi. As well as the original photographs, several of the images had been modified to display one of the following visible facial anomalies: missing teeth, significant acne, scars and protruding features (ears and nose) as well as strabismus. To maintain consistency with earlier studies, the strabismus angle corresponded to 50 prism dioptres in both exotropic and esotropic photographs.

"We used an already-validated questionnaire for the telephone interviews, similar to the questionnaire that we had used previously to assess the employability of strabismic subjects as perceived by headhunters,"4 explained Dr Mojon, who ensured that all close-ended questions were unambiguous to obtain a clear, non-subjective, result.

Of the 40 dating agents interviewed, 23 were able to view the digitally-altered images via the internet, and the remainder responded based on previous experience and perceptions, according to Dr Mojon.

"As well as general questions about perceived negative discrimination, we also asked the dating agents to rate how well they perceived people with the facial anomalies for each of the following characteristics: reliability, honesty, fidelity, likeability, being interesting, success, intelligence, attractiveness, sporting ability and eroticism," continued Dr Mojon. "We concluded by asking the dating agents how they thought the various types of facial anomalies would influence partner-finding ability."

What do the dating agents think?

When comparing strabismic with orthotropic individuals, 92.5% believed that strabismus would have a negative impact on ability to find a partner; 7.5% stated that the effect would be negligible, and no respondents thought that the condition would be beneficial in securing a romantic partner.

Although the existence of strabismus was overwhelmingly perceived to be negative, the dating agents were divided as to whether the age or gender of the strabismic subject would have an impact; the general consensus was that these factors were not statistically significant. However, contrary to previous study findings, exotropia was deemed to have the more significant negative impact when compared with esotropia: 20 dating agents thought that exotropia would have the stronger negative impact, whereas only four believed esotropia would be less appealing.

"This was a particularly interesting result; we think it may be explained by the fact that people value personality traits in a potential romantic partner differently than they do those of a potential colleague," suggested Dr Mojon. "For example, attractiveness was not found to impact significantly on employers' assessments of potential employees, whereas this was, of course, an important consideration for the dating agents."

How does strabismus compare?

The negative effects are undeniable

As in earlier studies, these results demonstrate that the impact of strabismus is greater than compromised visual function. The psychosocial distress and negative discrimination experienced by sufferers of the condition has the potential to impact quality of life, in some cases severely. Altering the appearance is important, but is nevertheless not the sole goal of strabismus correction.

"Surgery for this condition - as it restores visual function to what is normal for humans, in addition to providing aesthetic enhancements and eliminating the distress caused by the condition - should never be categorized as cosmetic," said Dr Mojon. "Nevertheless, because of the perception that strabismus correction is somehow frivolous and is conducted for purely cosmetic purposes, its necessity is often challenged by health insurance and managed care providers. I believe this is motivated primarily by increasing healthcare costs, but I also believe that denying reimbursement for this surgery is a mistake, not least because it has been shown to be more cost-effective than cataract surgery, diabetic pars plana vitrectomy for vitreous haemorrhage or amblyopia therapy."12

The negative effects of strabismus are undeniable. Because strabismus correction can improve visual function as well as contributing to the attainment of major life goals - securing a relationship and employment - and being highly cost-effective, Dr Mojon believes that the surgery should not be restricted, as it is not solely a cosmetic procedure.

Special ContributorDaniel S. Mojon, MD works at the Department of Strabismology and Neuro-Ophthalmology at Kantonsspital St Gallen, Bern, Switzerland. He may be reached by Email: daniel.mojon@kssg.ch 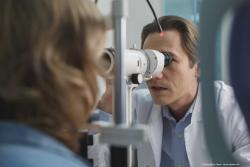