Anterior chamber lenses in the management of subluxated lenses

Anterior chamber lenses in the management of subluxated lenses

We need the data to create a decision tree to help surgeons find the best option for these cases among those available, he said. Doctors need better data to help them decide between surgical options.

Dr. Grabner said that subluxated lenses are an uncommon condition. A study of cases at his clinic showed that it was less than 0.94% per year, which is comparable to similar clinics. It is 1 out of every 226 cataract surgery cases, so we can say it's a fairly uncommon event.

Angle supported lenses were reported to have performed very well and were indicated in the presence of bleeding disorders, extensive sclerocorneal scarrin, an intact anterior vitreous face and when surgery had to be quick, as with older patients.

However, they should not be used where there were corneal endothelial problems or shallow chamber, abnormal angle, or where there was glaucoma and iris-defects, such as aniridia. I don't think they should be used in patients with a life expectancy of more than 10 years, he said.

Outlining the advantage of ACLs over PCLs , he said ACLs offer short surgical time, less bleeding, easy insertion and removal with minimal or no vitrectomy required. And there are no problems of haptic placement, lens tilt and dislocation, he noted.

Other advantages included no suture problems, minimal uveal contact and long term proven biocompatibility. PCLs, on the other, held the advantage in eyes with angle problems or endothelial damage, and PCLs are not dependent on the condition of the iris.

Dr. Grabner wound up his talk by demonstrating his surgery technique for posteriorally enclavated iris claw lens, which he said he liked a lot. However, he concluded by saying: I think we have very few comparative, long-term studies comparing anterior chamber lenses and the other options. I think we have a need for a long term study. 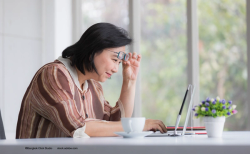 Spotlight on GA: A bright future with potential treatments