Where does SLT fit in glaucoma management?

Madhu Nagar reviews some of the studies that support SLT's place as a first-line therapeutic in the treatment of glaucoma.

The aim of glaucoma treatment is to preserve visual function with a minimum of side effects and at an affordable cost. Today, the best form of neuroprotection is found in the effective lowering of IOP and IOP reduction is still the treatment of choice in attempting to arrest or retard the loss of retinal ganglion cells.

In most primary open angle glaucoma (POAG) patients and patients with ocular hypertension (OHT) requiring reduction in IOP, selective laser trabeculoplasty (SLT) has been consistently shown to reduce IOP significantly over the course of a few years without major or any permanent side effects and complications. Consequently, the idea of potentially gaining some drug-free years for a newly diagnosed POAG or OHT patient by using SLT as the initial therapy is appealing. Ophthalmologists have, however, been reluctant to use SLT in this situation simply because of the poor reputation of Argon Laser Trabeculoplasty (ALT), its damaging effects on the anterior chamber angle structures and its unrepeatability.

Some supportive data did, however, begin to appear in ophthalmic literature, attesting to the validity of SLT as initial POAG therapy. In the original Melamed article in 2003,1 SLT was employed as the initial therapy for 37 of the 45 eyes reported. Although only 180° of the angle were treated, the IOP was reduced by a mean of 30% for the duration of the follow-up.

This data was corroborated the following year by Lai et al.,2 who prospectively enrolled 29 Chinese patients who were newly diagnosed with POAG or OHT and had no previous history of anti-glaucoma medication use, ALT or glaucoma surgery. One eye of each patient received 360° SLT whilst the other eye received topical medication. There were no significant differences between the two eyes during the five-year follow-up in terms of pressure reduction (over 30% IOP reduction), nor were there any notable differences in the failure rate. This study was, however, criticized for possibly overestimating the IOP reduction in the SLT-treated eye because of the crossover effect of the medication from the other eye.

During the same year, at the annual congress of the American Academy of Ophthalmology, Katz and colleagues4 confirmed the safety and efficacy of SLT as first-line therapy of OAG or OHT. At the congress, he reported the interim results of the multicentre (17 sites), prospective, randomized, and controlled SLT vs. medical therapy study. This trial was specifically designed to provide the best evidence-based medicine data to assess the merits of SLT as the initial glaucoma therapy. This study, in which many of the best glaucoma practitioners in North America participated, tested 94 eyes of 47 patients. Patients were randomized to receive either SLT in both eyes or medical therapy. After eight months follow-up, the mean IOP recorded in the medical treatment group was reduced by 7.6 mmHg, while the corresponding figure in the SLT group was 6.7 mmHg. The target IOP range was achieved in the majority of eyes in both groups. 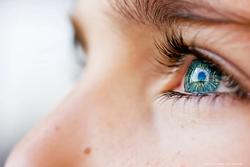