"This research is important because it has implications beyond refractive surgery," said Dr Wilson, director of corneal research, Cole Eye Institute, Cleveland Clinic, Cleveland. "Finding a magic bullet to block myofibroblast development specifically has relevance for preventing scarring in other anterior segment surgeries."

The mechanism for onset of haze involves the development of myofibroblast cells in the corneal stroma, an event that is driven in part by epithelial-derived transforming growth factor-beta (TGF-b) that reaches the stroma through surgically induced structural and/or functional defects in the basement membrane. The myofibroblasts both are opaque and produce disordered extracellular matrix that also contribute to the haze, Dr. Wilson said.

"These keratocytes are important in maintaining the stroma, and clinically, we have not seen any problems associated with the effect of MMC on these cells," Dr Wilson said. "However, the longest available follow-up is just over 10 years. It remains to be seen what will happen after 30 or 50 years."

Research to elucidate the biological pathways for the development of corneal myofibroblasts after corneal injury has identified a number of potential targets for inhibiting this process without interfering with the repopulation of the anterior stroma, including the cytokines TGF-b and platelet-derived growth factor.

Dr Wilson and colleagues are investigating the use of small molecules that penetrate the epithelium and establish a functional barrier against stromal exposure to epithelial-derived TGF-b until the basement membrane re-establishes itself. Gene therapy approaches also are being investigated. 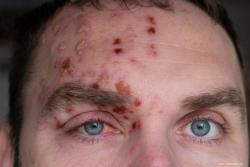