Age-related macular degeneration (AMD) is a common cause of vision loss worldwide, particularly in industrialized nations, where it is the main cause of blindness among people of 65 and older, explained Paul Mitchell, MD, at the World Ophthalmology Congress.

Age-related macular degeneration (AMD) is a common cause of vision loss worldwide, particularly in industrialized nations, where it is the main cause of blindness among people of 65 and older, explained Paul Mitchell, MD, at the World Ophthalmology Congress.

"Disease subtypes are early AMD, which accounts for around 75% of cases, and late AMD, which is further classified into dry AMD, with an atrophic presentation, and wet AMD," he said. Dr. Mitchell is a retina specialist in Sydney, Australia, and principal investigator of the Blue Mountains Eye Study (BMES). Data obtained in that research were comparable to those from other population-based studies such as the Beaver Dam, Rotterdam and EUREYE.

The neovascular form is most common in late AMD, its ratio of prevalence compared to atrophic being 2:1. In this presentation, vascular endothelial growth factor (VEGF) plays an important role in neovascular processes in the eye, and is the therapeutic target of AMD available treatments.

"Neovascular or wet AMD causes mild visual impairment in its early stages but progresses over time and frequently results in blindness," said Dr. Mitchell. "That's why detection of its major risk factors is key in the prevention of the disease. The natural and more important factor is age, with a significant step in the mid-70's, but genetics and especially smoking follow closely."

Genetics can confer a four-fold higher risk. Current smokers, according to pooled data from the BMES, Rotterdam, and the Beaver Dam studies, have a 300-fold increase in risk for AMD. "In average, smoking may prompt the appearance of AMD in 5 to 10 years in comparison to non-smokers," Dr. Mitchell pointed out. A possible association of cataract surgery with AMD was also found in another sub-study.

A growth of about 50% is expected in the global incidence of wet AMD, as longevity increases. "As this aging population looses independence in all daily activities, it poses a problem for the healthcare system, with increased use of community support services and a greater necessity for nursing home admission," he concluded.

The quest for topical treatments for the posterior segment 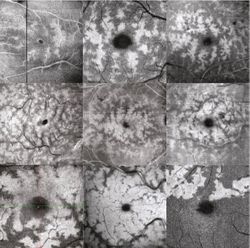