Research explores why ageing predisposes the eye to glaucoma

A research team in Australia has identified a possible mechanism through which ageing predisposes the eye to glaucoma. Conducting tests in an animal model, investigators found that old mice responded much worse to acute IOP challenges than younger mice.

This suggests that ageing increases retina and optic nerve vulnerability to IOP elevation and associated oxidative stress, said Dr George Kong, a PhD candidate at the Centre for Eye Research Australia at the University of Melbourne. Dr Kong conducts research in the lab of Dr Jonathan Crowston, PhD, who in a related study found that the ageing effect in mice can be modified with dietary alterations. Dr Crowston is professor and director of glaucoma research at the Centre for Eye Research Australia in Melbourne.

It is well established that glaucoma increases in incidence and prevalence with age, but the pathophysiology underlying this fact is poorly understood. The underlying hypothesis is that the central nervous system, specifically the neurons, becomes more vulnerable to injury as we age. The team of investigators in Dr Crowston's lab evaluated this hypothesis using established models for insulting the optic nerve in rodents to see whether age makes a difference in how they respond to elevated IOP.

"We don't think this is a glaucoma model, but it's a robust way of measuring how resilient the inner retina is to IOP elevation, which induces oxidative stress," Dr Crowston said.

The study showed clear differences between young and old mice in response to the IOP challenge. In the young mice, the inner retina lost about 40% of its functioning but recovered quickly, while the oldest mice lost about 80% of their functioning but never recovered fully, Dr Crowston said.

"Not only do old mice respond worse, but the impairment also lasts a lot longer," he said.

Among the 12-month-old mice, the response to the oxidative stress test and the rate of recovery fell between the responses of the younger and older mice.

"We're not sure whether these findings mean that the nerve cells themselves are more vulnerable to pressure when you get older or whether other factors such as impaired blood supply are important," Dr Crowston said, adding that Dr Kong is conducting research on this question. The potential role of mitochondrial impairment in glaucomatous damage also is being explored.

In a separate study, he and colleagues from the University of Melbourne and the University of California, San Diego, reported that diet-restricted old mice responded similarly to young mice and showed significantly less ganglion cell dysfunction during IOP challenge (p=0.009) and faster recovery (p=0.001) compared with old adlibitum fed controls. 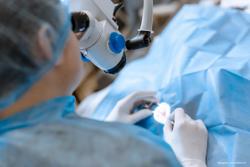 The advantages of incorporating ECP into the surgeon’s armamentarium