A proprietary phacoemulsification system featuring fluidics control software that allows automatic switching from longitudinal ultrasound to transversal on recognition of occulsion and back again to longitudinal on occlusion break.

'Phacomorphing' is a term used to describe an advance in phaco technology using a particular system (WhiteStar Signature, Abbott Medical Optics) with fluidics control to switch automatically back and forth between longitudinal and transversal (Ellips) ultrasound. This ability reduces power usage and improves the efficiency of cataract removal compared with the use of longitudinal ultrasound alone. The benefits of phaco¬morphing are further enhanced in denser cataracts by using a bent versus a straight tip. All of this is according to research presented by Donald R. Nixon, MD, at the annual meeting of the American Society of Cataract and Refractive Surgery.

"With advances in phaco technology, surgeons now have the choice of directing ultrasound energy in either a linear or transversal direction," said Dr. Nixon, surgical director, TriMed Eye Center, Barrie, Ontario. "However, it seems logical to use the transversal energy at a point when the phaco needle is in direct contact with or ensheathed within the lens material, because in theory, lateral dispersion of energy in this situation would allow for the most effective use of mechanical and cavitational energy for lens disassembly."

"The results of my prospective study confirm that the computer-controlled mechanism within [this phaco] system that enhances energy dispersion with needle occlusion by triggering transversal ultrasound allows us to become more efficient," he said. "Surgeons will see this difference clinically based on clearer corneas postoperatively and reduced case times in the OR. Moreover, if a surgeon has the ability to grade cataract density accurately preoperatively, it may be possible to enhance efficiency further by choosing not only the type of energy dispersion used for cataract removal, but also the design of the needle."

He subdivided the second group by randomly assigning eyes to surgery with a bent or straight needle. Transversal phaco was activated, according to pre-set parameters, 100 ms after recognition of occlusion and maintained until occlusion break, after which the system automatically returned to longitudinal phaco.

"We know that most phaco energy is expended in removing the nucleus, and the [nucleus-grading software] provides a quick, objective, reproducible, and transferable grading based on sampling of volume and density," Dr. Nixon said. "To my knowledge, this is the first study that compares the efficiency of surgery performed with different types of phaco energy dispersion using a uniform method of cataract density grading."

The two study groups were comparable in their preoperative characteristics. Analysis of effective phaco time (EPT) data showed that there was a direct linear correlation with cataract density (that is, energy used for removal increased with increasing cataract grade) using either of the two software versions. With eyes divided into subgroups by software-determined nuclear density, no statistical difference was seen in mean EPT between the two phaco technologies in eyes with grade 1 cataracts. EPT, however, was significantly less in eyes operated on with phaco¬morphing combining longitudinal with transversal compared with the longitudinal group in the higher grades. Comparing the procedures performed with longitudinal only versus with phaco¬morphing and the straight needle, a statistically significant difference existed in EPT favoring phaco¬morphing for cataract grades 3 to 5.

"This suggests that combining the [transversal] technology enhances phaco efficiency even for those surgeons that prefer a straight needle design," he said. "Though, for the densest cataracts [grade 5], there was a significant benefit of greater efficiency performing phaco¬morphing using the bent needle compared with the straight needle, but both were better than longitudinal alone."

With all 1C eyes pooled, needle time and BSS consumption also were significantly less when using the phaco¬morphing technique compared with longitudinal ultrasound only. Using a video, Dr. Nixon demonstrated that when using the 1B software with longitudinal ultrasound only, there was some repulsion of nuclear material at the time of occlusion break, despite the benefit of the enhanced fluidics system of the phaco platform. In contrast, with phaco¬morphing, at occlusion break the nucleus material simply rotated without being repulsed.

"As rapid adjustments in both power and fluidics parameters occur during a phaco cycle, computer control has taken over from surgeon control. With more frequent sampling of the parameters and responding to changes in the microenvironment, this leads to better phaco efficiency," he said. "Being able to assess an individual cataract grade objectively preoperatively may allow for pre-programming the phaco setting and tip design to improve safety and efficiency further." 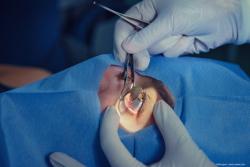