Canaloplasty: An expert's point of view

A question and answer session with a canaloplasty expert.

Dr Richard Lewis et al., recently published the results of a two-year interim canaloplasty study in The Journal of Cataract & Refractive Surgery, and we asked him about his recent work.1

Q: What inspired you to adopt canaloplasty?

Everyone working in glaucoma is searching for a better surgical approach. Historically, trabeculectomy has been the standard. Yet, study after study has revealed the severity of multiple complications and the complexity of the postoperative management after trabeculectomy. Most of these problems are related to creating and maintaining a sclerostomy or 'hole' in the eye. In an effort to avoid these immediate and late post-op problems, I have searched for a better surgical alternative.

Q: How many years have you been performing canaloplasty?

About four years now. I have a few canaloplasty patients that I've been following up with for three years but we also did some earlier approaches that weren't the full canaloplasty. Four years ago our technique was to simply pass the catheter and inject viscoelastic into the canal. Without placing the suture, the IOP was not sufficiently low. This led to the use of the suture in the canal.

Q: What type of patient do you recommend for canaloplasty?

The ideal patient is someone with open-angle glaucoma (OAG) who wants to reduce their medication, as well as control their pressure without having a bleb. A number of patients fit this category, such as contact lens wearers, patients using anticoagulants, immunosuppressives or chemotherapy and patients that don't heal well, where a bleb might get infected. Canaloplasty is also recommended for people who scar easily, namely patients with African heritage.

Q: In your 24 month data, what was the profile of your patient group?

The patient group was made up of 127 patients from 14 different sites. It was pretty evenly distributed between male and female, all above 18 years of age. Most patients were Caucasian, with a handful of black and Asian patients. These patients were spread evenly across North America and Europe, as we had two locations in Germany and one in the United Kingdom.

Q: What was the general protocol of this research?

These are patients that had OAG, who may or may not have had cataract surgery previously. Some patients in the study even underwent combined phaco/canaloplasty. All patients were included in a prospective fashion. Some surgeons had more experience with the procedures than others did; in the US there was a group who had very little experience with non-penetrating procedures and there was a group in Germany who were outstanding. Patients had an ultrasound of the canal taken before and after the surgery and then they were monitored for two years. 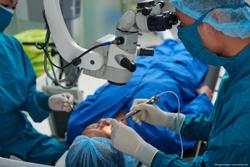